Pentagon kicked off the North American portion of their 2019 World Tour in Toronto Canada!

As huge fans of “Shine” and “Naughty Boy” we quickly snatched up tickets when we heard that Pentagon was coming to Canada.

We spent weeks listening to all of Pentagon’s recordings and studying the members faces to prepare for the event.

When the day finally came, we headed out.

The theatre was unexpectedly TINY!

While this truly isn’t a great shot- we truly DID see Hui a few hours before the concert started! We were so surprised that by the time we pulled out our phones, we were unable to catch a good shot.

We noticed some large unmarked vans coming in, and a conspicuous looking police officer who kept eyeing us sternly. So we watched…. and were rewarded!

As it turned out, a big van pulled up and people started taking out suitcases and looking through them. They looked confused and shortly Hui himself came out and started rummaging through them. He was crouched close to the ground and surrounded by production people which made it hard to capture in a photograph.

Just the same- we were ecstatic to have seen him!!! 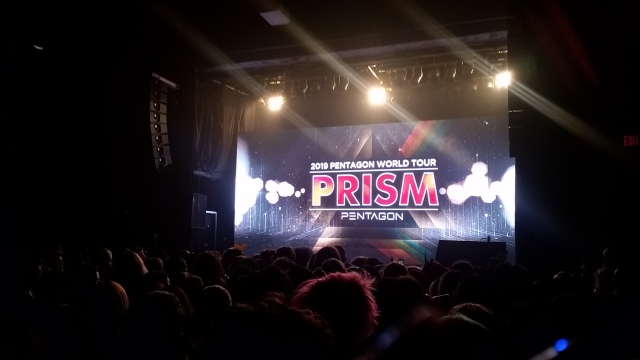 The theater was a mere 33ft X 45ft with a stage only 25ft long. We have NEVER BEEN SO CLOSE before! It was absolutely surreal!

There weren’t any screens- and honestly- we didn’t really need them! While it was difficult to see over waving light sticks and cell phones, we were able to see ok.

I can’t emphasize how close we were!

WHAT TO EXPECT: The Line Up

then, much shouting, screaming and chanting brought on an encore:

We were absolutely blown away. The venue was small- so we were able to see the dancing and facial expressions close up! It was PHENOMENAL

You’ll find our recording of their performance of Havana below:

We were blown away by the high energy the guys had on stage- they sang and danced their hearts out for us- one song after another with very minimal breaks.

Despite being short a member, the show went on without a hitch.

We loved how cute they were as they struggled to communicate in English and were proud of their efforts. Kino did much of the translating.

The energy and intimacy this concert offered, truly made it one of the best I’ve attended.

Are you going to see PRISM? I’m sure you’ll enjoy it as much as we did!

Did they switch up their line up? Which was your favourite song?

We’d love to hear from other Canadian and American Kpop fans!

Please let us know in the comments below!

One thought on “PENTAGON PRISM CONCERT 2019”